KidZania Bangkok is the largest KidZania attraction in Asia, introducing kids to more than 80 careers in an indoor replica of a real-life city, complete with kid-sized streets, buildings, utilities and vehicles. Poised to become an educational landmark, KidZania Bangkok endeavors to empower, inspire and entertain children aged 4-14 throughout Thailand.

“KidZania Bangkok joins a global community that connects more than 20 million children from around the world as a way to promote change, inspire global citizenship, and build strong community awareness,” said Xavier López Ancona, president and founder of KidZania. “We believe KidZania Bangkok is an exceptional addition to the Thai community – delivering real-world, learning moments that inspire kids to be their best selves and make their world better.”

Aspiring pilots and aircrew can climb into a real Air Asia Boeing 737 fuselage and cockpit for a test flight. Future auto mechanics can learn new skills at the B-Quik auto repair shop. Or, children can explore KidZania Bangkok’s more unique establishments, such as the Green Tea Factory or Drinking Water Research Center.

The Eternal Spirit moments before being ignited

“KidZania Bangkok is the only kids’ destination of its kind in Thailand, where children have an authentic and powerful educational and social experience, rooted in real-life and wrapped in the fun of play,” said Mr. Scott Schubert, vice chairman of Kids Edutainment Holdings (Thailand) Co., Ltd., and Governor of KidZania Thailand. “At KidZania, kids role play as teachers, chefs, surgeons to learn about careers. It’s this type of active learning that instills self-confidence, builds self-esteem and ultimately, prepares a child for a bright future.”

The event started today at 4:30pm with the arrival of hundreds of guests including representatives of 10 KidZania States: Mexico, India, Egypt, Kuwait, Philippines, South Korea, Portugal, Japan, Singapore and Kuala Lumpur, as well as members of the Central Government of KidZania. Everyone had the chance to take a picture upon their arrival.

Before finishing his participation, Mr. López invited all guests to witness the lighting of the Eternal Spirit and sing together the KidZania National Anthem that celebrates the past and future of this great nation. This significant moment marked the Official Founding of KidZania Bangkok, inviting children to become part of our nation and to Get Ready for a Better World!

A Red Carpet preceded the ceremony and guests were able to walk through the streets and plazas of KidZania Bangkok, the 12th and largest indoor KidZania city.

A young mechanic learns to change a tire at KidZania Bangkok 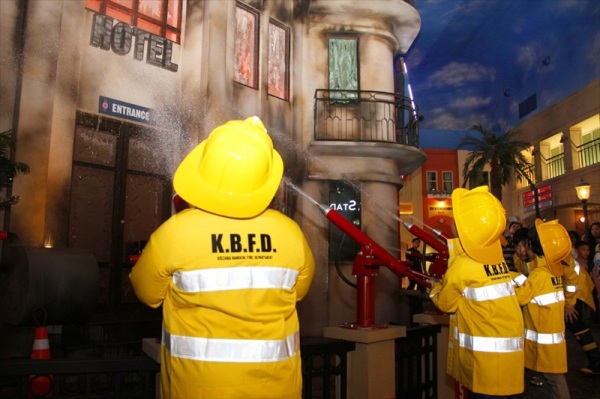